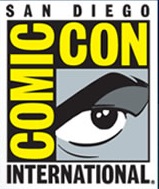 Now what does Comic Con have to do with needlepoint? well absolutely nothing at all! But I for one realize how very important this is to the economy of our city. I am totally fascinated with the devotion of so many of these attendees as they dress in costume and act their parts. Talk about the ultimate people watching event!

What started some 40-plus years ago as a small gathering of comic book enthusiasts has grown into one of the biggest pop culture events around! The much anticipated Comic Con 2012 is about to begin in San Diego. Tickets to Comic Con sold out after 90 minutes when first offered earlier this year. One of these days, I am going to try and land one. I really don’t need to go for the 4 days, just 1 day would be fine for me…or at least I say so now. 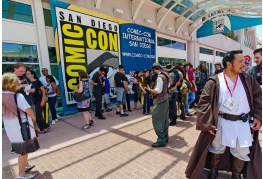 Fan devotion is nearly at a fever pitch, as fans of the “Twilight” saga are already camped out in front of the convention center in hopes of attending the panel devoted to the latest film, according to numerous reports.

If you need a break from the panels and fan booths, even more exotic opportunities await outside the Convention Center! Start with the annual Zombie Walk — being held on, of course, Friday the 13th – taking place in the nearby and very lively Gaslamp Quarter.
Even more zombie adventure awaits as Petco Park has been transformed into the Walking Dead Escape. I hope that they don’t mess with the pitcher’s mound!

Wow…look at all those people! I know a few of my friends have tickets for this weekend. Have a grand time and I will live vicariously through your experiences.

Now back to needlepoint! Elizabeth is back to work in Needlepoint Now Studios working on the September/October issue of the magazine just as I am. It is fun as we both work away at our keyboards even though separated by a few thousand miles, but yet close in contact with texts, emails and phone calls. I will be up there in 2 weeks! yeah and I can’t wait!

My goal for today is to keep working on my charting for the magazine using Illustrator. I have been keeping up with the discussions on Facebook about working in a Mac program called Pages for creating stitch guides.  When I first started on this new adventure of writing guides, I did struggle with the learning curve of Illustrator…but now I’ve got it! I decided that I would use the same for my own work as this way the continued use will just help me make better charts for the magazine in the long run!

The other task for today is to get my entrys ready for shipment for the American Needlepoint Guild Exhibit that is in Philadelphia next month. Deco Kitty is going along with the Fab Firs. I needed to go to the Container Store and buy a few boxes as everything I came across wouldn’t work. It kills me to pay good money for boxes when so much of it is just recycled later on, but good boxes are a must for shipment of these treasures. I will need to remember to take a picture of Deco Kitty for you!

AlleyCat decided to make herself comfy on the couch inbetween the threads and canvases of the NeedleDeeva Thanksgiving set. “that’s okay Mom, there is plenty of room for me here!” Now you can see why I use these containers for my current stitching projects. and until next time…keep on stitching