Our bus was ready to take us to our next destination which was the Kawashima Textile Factory. “It is one of the most respected textile companies in Japan. For decades Kawashima has been entrusted with creating some of the country’s most precious fabrics, including the interior of the Emperor’s train carriage. As a student of the school I was lucky to be given a peek behind the doors of the factory, including the secret room where they make drapes for some of country’s most important shrines.”

Funny thing is that it was requested of us to take absolutely NO pictures, but if you follow the hotlink at the top, you will see the machinery and everything else that we did! It was rather fascinating and the size of the tapestries that they were working on were rather large, overwhelmingly so. We were able to shop for some beautiful textiles before we left! 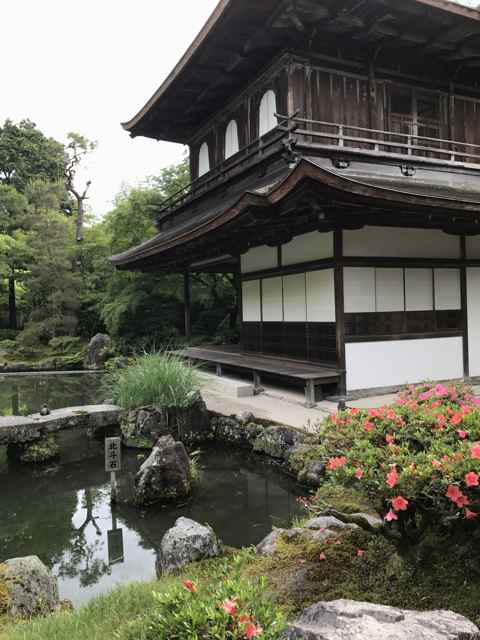 “Ashikaga Yoshimasa initiated plans for creating a retirement villa and gardens as early as 1460, and after his death, Yoshimasa would arrange for this property to become a Zen temple.The temple is today associated with the Shokoku-ji branch of Rinzai Zen.

The two-storied Kannon-den (観音殿, Kannon hall), is the main temple structure. Its construction began February 21, 1482 (Bummei 14 , 4th day of the 2nd month).The structure’s design sought to emulate the golden Kinkaku-ji which had been commissioned by his grandfather Ashikaga Yoshimitsu. It is popularly known as Ginkaku, the “Silver Pavilion” because of the initial plans to cover its exterior in silver foil; but this familiar nickname dates back only as far as the Edo period (1600–1868).

During the Ōnin War, construction was halted. Despite Yoshimasa’s intention to cover the structure with a distinctive silver-foil overlay, this work was delayed for so long that the plans were never realized before Yoshimasa’s death. The present appearance of the structure is understood to be the same as when Yoshimasa himself last saw it. This “unfinished” appearance illustrates one of the aspects of “wabi-sabi” quality.

Like Kinkaku-ji, Ginkaku-ji was originally built to serve as a place of rest and solitude for the Shogun. During his reign as Shogun, Ashikaga Yoshimasa inspired a new outpouring of traditional culture, which came to be known as Higashiyama Bunka (the Culture of the Eastern Mountain). Having retired to the villa, it is said Yoshimasa sat in the pavilion, contemplating the calm and beauty of the gardens as the Ōnin War worsened and Kyoto was burned to the ground.

In 1485, Yoshimasa became a Zen Buddhist monk. After his death on January 27, 1490 (Entoku 2, 7th day of the 1st month), the villa and gardens became a Buddhist temple complex, renamed Jishō-ji after Yoshimasa’s Buddhist name.

After extensive restoration, started February 2008, Ginkaku-ji is again in full glory to visit. The garden and temple complex are open to the public. There is still no silver foil used. After much discussion, it was decided to not refinish the lacquer to the original state. The lacquer finish was the source of the original silver appearance of the temple, with the reflection of silver water of the pond on the lacquer finish.” 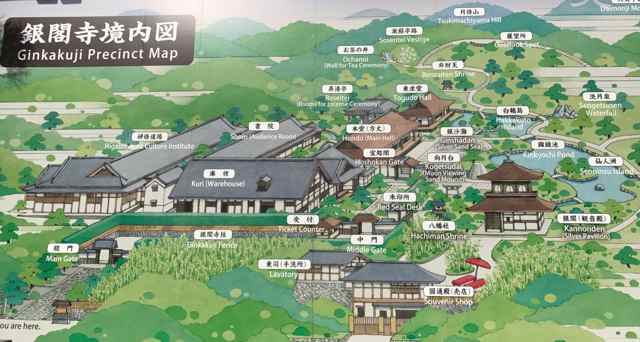 This was the map of the Silver Pavillion. We really didn’t follow it, but rather explored on our own. It was quiet and serene and so beautifully presented as is everything in Japan. 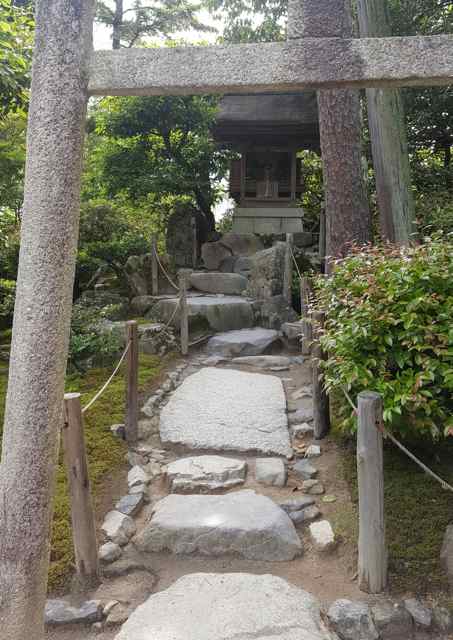 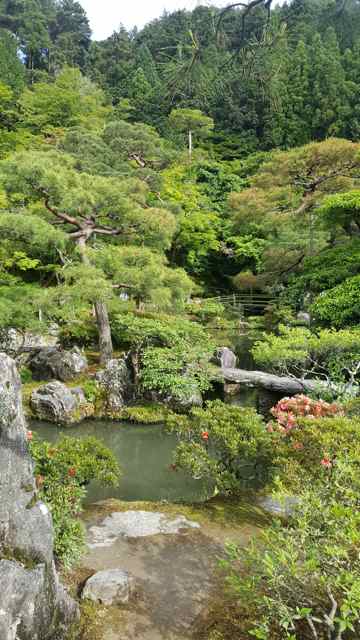 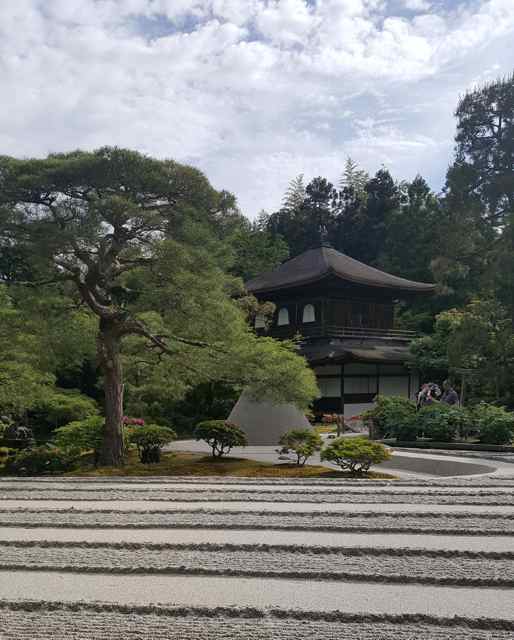 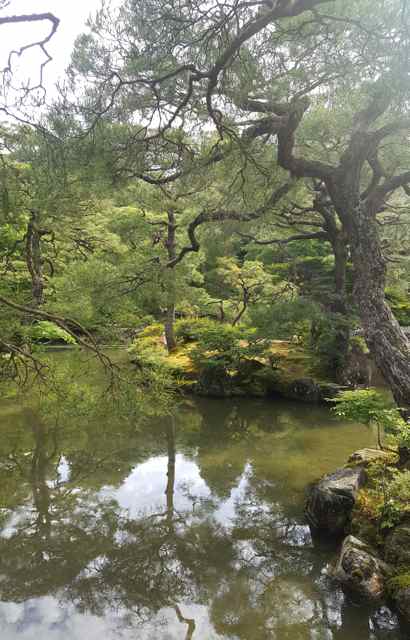 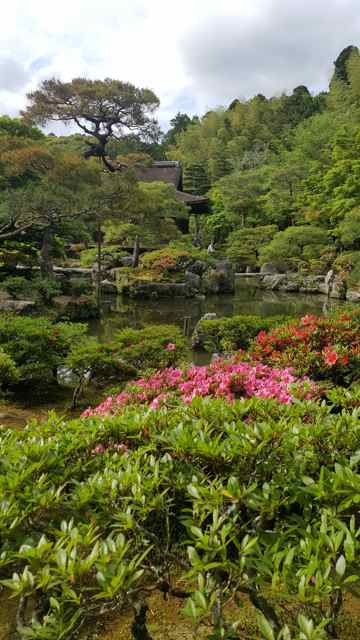 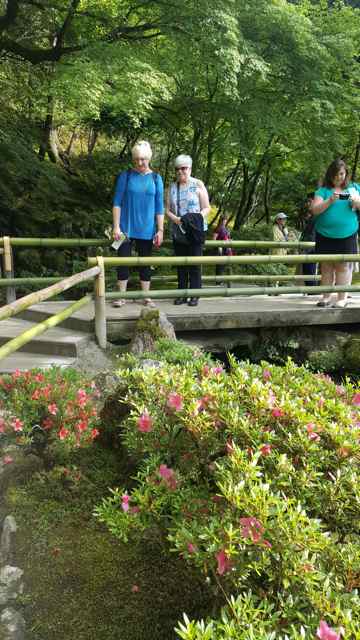 My travel buddies Janet, Pat and Lizzie (from left to right.) We had a very, very busy day so we were all happy to head back to our hotel and have the evening to ourselves!

Only one more day left in Japan. I might be able to finish it all in one post, just depending on how many pictures I use!  So for now I will say…sayonara

2 thoughts on “Gold to Silver!”