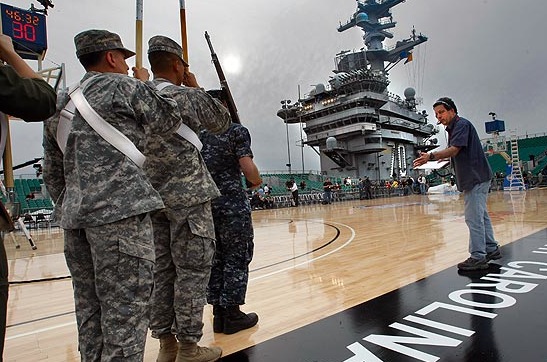 Today on Veterans Day, November 11, the USS Midway Museum will host a nationally telecast college basketball game whose proceeds will benefit several veterans organizations. Fox Sports will telecast the San Diego State University vs. Syracuse University game on the flight deck. This is the 2nd year that this special game has taken place aboard the Midway. I am not a basketball fan, but for this I would go…unfortunately I did not try to buy tickets early enough.

p.s. I goofed! This is the 2nd year of this special basketball game, but it is the first time that it is being played on the flight deck of the USS Midway. Last years game was played aboard the USS Carl Vinson.

“USS Midway was an aircraft carrier of the United States Navy and was retired in the 2004 to be moored in San Diego as the USS Midway Museum. “It is dedicated to preserving and honoring the 225,000 young men and women who served aboard the USS Midway–and by extension all those who serve in uniform. They pioneered new naval aviation standards. They led successful humanitarian missions. And they protected America. We believe it is vital that we preserve their heritage for future generations. The USS Midway is striving to become America’s living symbol of freedom.”

It was and still is a floating city at sea and you can relive nearly 50 years of world history aboard the longest-serving Navy aircraft carrier of the 20th century. Guests aboard the Midway typically spend 3-4 hours marvelling at all of her attributes. 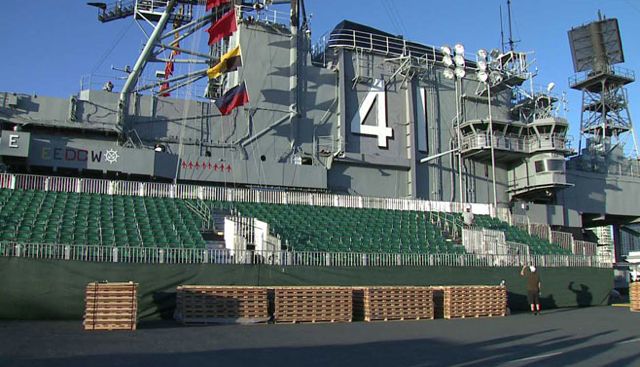 What a marvelous way to salute the veterans today! I would like to thank each and every veteran and active military member for answering the call to serve our country. I wish that I could thank each and every one of you personally from Jerry to Nancy to my niece Miranda and everyone else in between. 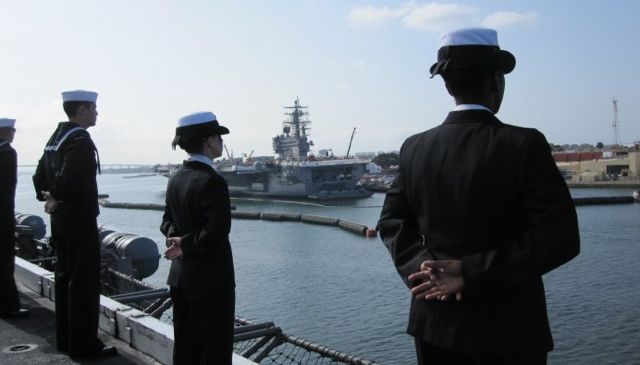 This is my niece standing in the middle as her 7 month deployment aboard the USS Nimitz was coming to end a few years ago. Waiting for the ship to come into the naval station San Diego was a very memorable moment and one I won’t forget for many years to come. I was there for her along with her boyfriend and a surprise visit from her Mom! Very special day indeed! can I tell you how proud of her that I am?

I worked the day away yesterday between stitch guides as I only have about 20 something that I need to finish up. I kid you not! A little straightening up of threads, threads and more threads, a little laundry and of course some stitching! 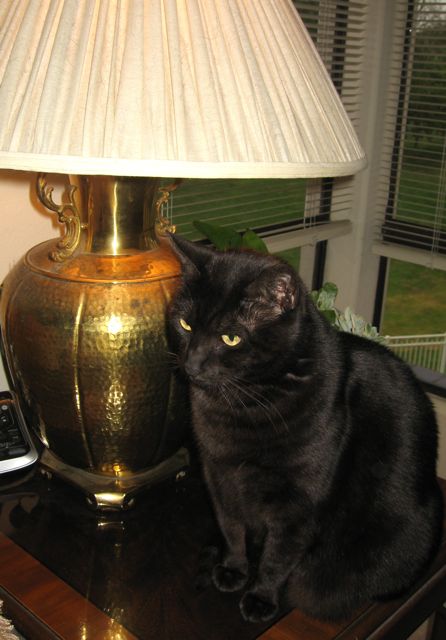 AlleyCat was keeping herself toasty under the lamp. and until next time…keep on stitching